Yajna Everything You Should Know About Yajna- 2021 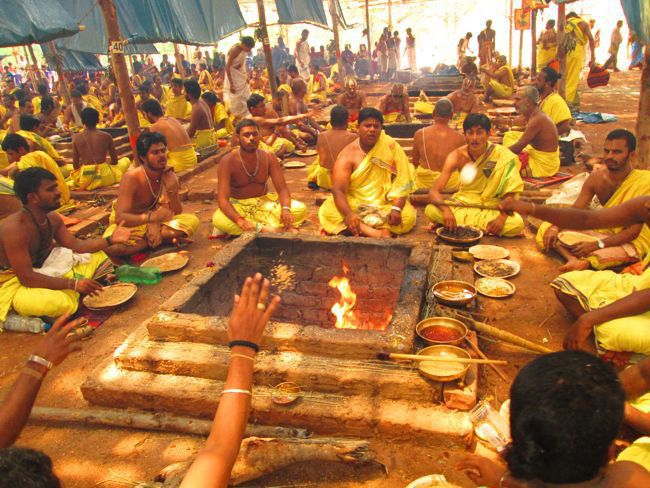 Yajna Everything You Should Know About Yajna- 2021

Yajna or Yagya holds a supreme position in Yogic philosophy and Hindu culture & religion. No major or minor event in life seems complete without a proper yajna ceremony. God of fire is the chief guest in a yajna along with the recitation of mantra chanting/Vedic mantras. Hence, it envelops every little and big task in life. Moreover, yoga practitioners in Rishikesh, India practice yajna/aarti/pooja in their yoga training courses. Let’s explore in detail the importance of yajna in yogic philosophy. Keep reading.

Yajna: What Does it Mean?

Derived from the Sanskrit word ‘Yaj’, it loosely translates to the worship of deities, unity, and charity. Hence, the single word has three fold meaning. Being one of the oldest traditions of Sanatan Dharma, Yajna is a ritual that is performed to welcome guests.

The main aim of Yajna is to give back to the Universe. Hence, people are encouraged to share what they have to make space for more and not to be accumulating more than necessary.

Yajna is performed around the fire. Moreover, offerings are made to the burning fire (Agni) that evokes a sense of gratefulness. It is believed that things offered to the fire reach the Divine or God at a much faster pace. Therefore, the Agni serves as a messenger in a Yajna.

In case you want to have a deeper insight into the significance of the five elements, you should join the best yoga school in India That will help you not just learn about the fire but also other elements.

Prime Performer of a Yajna

A perfect Yajna requires four priests to preside over the ceremony. They are – the Hotra, the Udgata, the Adhvaryu, and the Brahman. Thus, a Vedic Yajna takes place under the guidance of these four qualified people.

Role of 4 Chief Performers in Yajna

Reads Rig Veda and recites various invocations to the live Agni of the Yajna.

Adhvaryu is responsible for perfecting all the physical details of the Yajna. For instance, measuring the ground to perform Yajna as per instructions in Yajur Veda. Moreover, he or she is in charge of building the altar to light the fire.

Introductory and eulogistic verses are orated by the Adhagtra. Moreover, oration involves mastery over Prana, Apana, and Vyana in the body.

Brahman resides over the Yajna and is also known as the Superintendent of the complete process. Moreover, the Brahman thinks about the deities of mind, that is, the Moon God.

Therefore, every individual has a special and specific role that needs to be fulfilled for the completion of the Vedic Yajna.

According to the Vedas, there are more than 400 Yajnas. Out of these 400, only 21 are deemed as compulsory. The compulsory yajnas are known as Nityakarmas whereas the optional Yagya is termed Kamyakarmas.

Agnihotra & Aupasana are performed two times a day, once in the morning and once in the night. The remaining yajnas, whether compulsory or optional, are performed over the year. There is no specific time for its performance.

The fire is regarded as the ultimate destroyer. Moreover, yajnas also help in the purification of the mind, body, and surroundings. Aahuti is offered to feed the fire so that it goes on until you are done with your meditation oryagnapractice.

The goal of Yajna in yoga practice is the awakening of the mind and body. It releases negative entities from your being that are destroyed in the fire. Hence, it purifies the soul of a yoga practitioner.

Mantra chanting is one of the most important elements of a Yagya. Practitioners need to chant mantras along with the chief orator that increases their concentration.

You remain mindful when you focus on different mantras. It brings you to the moment and ensures you never get lost in the mental chatter.

Yajnas play a significant role in yoga practice along with everyday life events. Just make sure you first read about various mantras so that you can easily understand what is being orated. For that matter, you should join the best yoga school in India. Learning under the yoga experts ensures you earn genuine and true knowledge. It will remove all vices from your life and enhance your living standards.